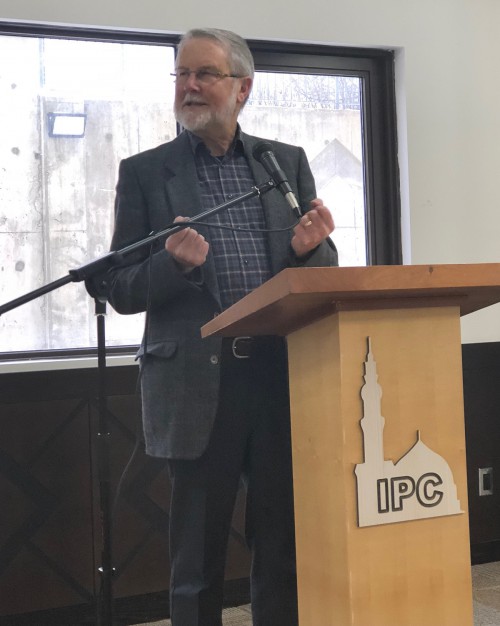 This year’s winner of the prestigious Emmanuel College Distinguished Alumni/ae Award is Harry Oussoren Emm 6T8. The Emmanuel College Alumni/ae Association selects the recipient annually to honour and bring attention to graduates of the College whose vision and leadership have distinguished them through extraordinary and exemplary ministry to the church, academy or society at large.

Harry Oussoren was born in 1944 in Middelburg, the Netherlands, to the sound of bombs dropping in and around the city. Despite the turbulence of his early years, he went on to serve as an influential and impactful leader in the United Church of Canada (UCC) and mentor and teacher at Emmanuel College.

Since his ordination in 1968, Oussoren has served several pastoral charges in both solo and team ministries and also given leadership at the General Council level, first as secretary for theological education and later as executive minister for congregational development and support to local and educational ministries. He also served on the Council of Emmanuel College and the Senate of Victoria University. He was adjunct professor at Emmanuel College for Canadian contextual theology teaching in partnership with Harold Wells Emm 6T6.

At the General Council, Oussoren led in a number of crucial areas. He and his job-sharing spouse co-staffed a report, in 1984, the first UCC report recommending the eligibility of gay and lesbian members for the order of ministry. He authored the 1986 Learning on the Way report advocating theological education for lay members; was a key support for ministries in French; stabilized theological college funding; and kick-started the process which led to Rendezvous, the national UCC gathering of youth and young adults.

In his work as a pastoral minster, he nurtured congregational growth as well as encouraged outreach to the community, resulting in community service awards in both Scarborough and Mississauga. In an innovative approach at one congregation, Oussoren insisted that teenage skateboarders using the church parking lot were to be welcomed rather than banned, which led to the development of a thriving community youth program which has since been separately incorporated as a community ministry of the UCC.

Oussoren has been committed to interchurch/interfaith activities in every setting where he has worked. He was an active participant for many years in the UCC exchange with the United Protestant Church in East Germany. Post-retirement, Oussoren was the chief organizer for an annual interfaith festival in Etobicoke South leading to an award from the National Muslim Christian liaison committee.

Writing has been another activity woven throughout Oussoren’s ministry. In 1972, he became the first editor of Insight, the Toronto Conference newsletter. In the early 80s, he helped to found the Practice of Ministry in Canada journal, chairing the board and writing the monthly Upfront columns for 15 years. Over the years, he has written for Touchstone, the Observer and Mandate magazines. Post-retirement, he writes on his Pilgrim Praxis blog at www.minister.ca.

Arguably, the major writing project of his ministry was his thesis on the place of baptism in church and society for his ThD degree from the University of Geneva. Oussoren began learning French in 1978 only a few months before beginning his studies in Geneva. He persevered linguistically through the two-year, French-only doctoral program, then returned to Canada to write the thesis in English, which he successfully defended in French in 1983.

Though he retired at the end of 2009, Oussoren has been active in re-purposing and renewing church properties, including Wesley Mimico Church, the Albright Gardens Retirement Community in Beamsville; he is actively involved in supporting growth of the new Ministere Protestant Francophone de Toronto; and is advocating for a 1% tax on real estate sales to fund an Indigenous People Fund by and for Indigenous human development.

Oussoren’s career emerged from a deep commitment to education. His family emigrated to Hobokon, NJ, when he was six and later moved to Vancouver, BC. Harry did his undergraduate work at UBC, including a year studying theology on a WUSC exchange scholarship at the University of Hamburg, then theological studies at Emmanuel College where, in his graduating year, he was the recipient of the Sanford Gold Medal. He pursued further theological studies at St. Michael’s College (MA) while simultaneously earning an MEd degree in adult education at OISE.

Oussoren is married to Glenys Huws and they currently live in Ottawa. They have two sons and four grandchildren who give them joy.

“We need to keep doing theology humbly, partly because theology has to change as the context changes. Theology is always a moving enterprise. We have to connect that story of Jesus as friends and companions of Jesus, in that changing context. We can never fully comprehend the Divine story. We always apprehend, not comprehend the story, which is why humility is important,” says Oussoren.