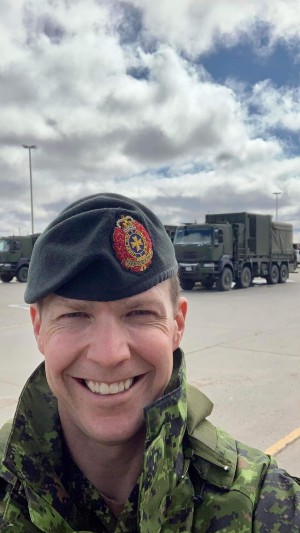 Tyler Powell’s Emm 1T1, 1T6 service as a military chaplain for those who serve and protect Canada has been the consistent focus of his vocational journey.

When Powell served as a reservist for the Canadian Armed Forces (CAF) with the Royal Hamilton Light Infantry early in his career, he also served as a United Church of Canada (UCC) youth minister. In 2006 he engaged a call to ministry and joined the Emmanuel community as a candidate of the College’s MDiv and, later, MPS programs.

“UCC ministers in my life had spoken highly of Emmanuel,” Powell, a native of Burlington, Ontario, recalls. He reflects that in addition to classroom instruction, listening to Prof. Fred Graham playing organ and spending afternoons waxing theological with classmates in the College’s garden are among his richest student memories.

Since graduating from Emmanuel, Powell has served in ministry at UCC congregations in Chatham and Milton, Ont.; and, since his 2017 enrolment as a military chaplain, has been stationed at Canadian Forces Base Edmonton, where he has served various units and military units. He also is a registrant with the College of Registered Psychotherapists of Ontario.

Powell has amassed a number of awards and honours at home and abroad including the CAF Special Service Medal—Expedition for service to soldiers deployed to Ukraine; a Ukrainian Foreign Service Decoration for excellence in international cooperation; and the Canadian Joint Operations Command Commendation for excellence in service to soldiers in Germany. His honours began when he was a student, receiving an Emmanuel Bursary Award for a student most likely to engage in chaplaincy; recognition as a top candidate at the Canadian Forces Chaplain School and Centre in Borden, Ontario.

But Powell explains that his most rewarding vocational experience has been the opportunity to assist positive change in the lives of others—whether through shepherding new spiritual insights or the recognition that all is not well and therapeutic care is needed.

“Serving as a military chaplain in the CAF has been an absolute privilege,” Powell says. “I am hopeful that others will consider this ministry as they discern their place in God’s story and the United Church of Canada.”

Reflections at the End of the Year: Interim Principal John H. Young