News / Conference on Racism and Anti-Racism on Campus 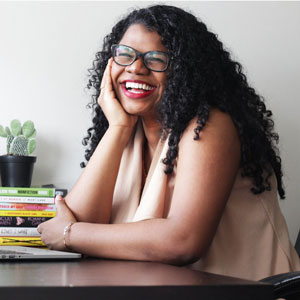 As of December 8, 2020, Black, Indigenous and People of Colour (BIPOC) identifying students at Victoria have had access to a full-time, BIPOC counsellor. This new position was created after extensive consultation with equity groups including the Victoria Black Student Network (BLVCK), VUSAC and with BIPOC students in the Dean of Students’ Advisory Committee. In mid-December, VUSAC proudly launched a new student award with the support of Victoria University senior administration called the VUSAC BIPOC Leadership Award. Additionally, in an effort to further one of Professor Will Robins’ Presidential Priorities, to foster diversity and inclusivity, Victoria hosted a two-day conference on November 16 and 20 on racism and anti-racism on campus.

This conference, presented by the Office of the Dean of Students, the Victoria Black Student Network, and the VUSAC Executive and Equity Commissioner, featured a keynote address by Toronto-based journalist Eternity Martis, author of They Said This Would Be Fun: Race, Campus Life, and Growing Up (McClelland & Stewart, 2020). Martis spoke of her experiences of racism in higher education as she pursued her undergraduate degree at a Canadian university. “When you are Black,” she stated, “you are hyper-visible and invisible at the same time. I was met with ignorance and statements such as, ‘Is that your real hair? Your English is so good! What country are you from—Africa?’” She explored how freedom of speech can damage marginalized communities and that institutional racism has created generational trauma. She also commented on how exposure to racism can lead to disease, suicidal thoughts and increased drop-out rates among BIPOC students. Her powerful keynote was followed by a thoughtful Q&A.

Following Martis, three BIPOC-identifying Vic students joined a panel to discuss their experiences of racism on campus. All three of them spoke extensively of the micro-aggressions they had witnessed throughout their educational careers. “You start to question your own worth,” said one student, “but we are more than just victims of trauma; we are examples of resiliency.”

The third part of the conference was a discussion on systemic racism in higher education with U of T’s Dr. Alissa Trotz, professor of Caribbean studies and the director of Women and Gender Studies, and U of T’s Dr. Rinaldo Walcott, associate professor at the Ontario Institute for Studies in Education and director of the Women and Gender Studies Institute. They, too, spoke of the need for universities to overthrow their Euro-centric ways and take up the challenges offered by non-whites. They explored the concept of diversity and that diversity says nothing about how power operates. “So what if we have a diverse student body—plantations were diverse,” said Trotz. “The university must become a change entity,” said Walcott. “It can’t remain wedded to the form it has—we must change its form. In terms of leadership, who gets to sit at the table and can this table handle dissent?”

Vic looks forward to hosting more conferences and programming on important issues throughout 2021 under the auspices of the Ideas for the World program.