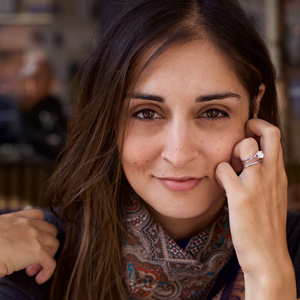 “You know,” says Erin D. Cauchi, “I still, to this day, refer back to my textbooks from Vic for Cold War and post-war history. The courses I took, especially in Vic One’s Pearson stream, lay the groundwork for a lot of what I have covered throughout my career. I loved studying history and, as a journalist, I get to write the first drafts of history.”

As an investigative journalist, Cauchi has explored military campaigns, global conflicts, issues related to national security and human rights. Before attending Columbia University for journalism, she studied history and political science at Victoria College. “I knew I wanted to be a journalist from a very young age. Vic helped me develop my curiosity for discovery and fostered my love of history. It also encouraged my love of journalism as a writer and then co-editor-in-chief of The Strand.” Cauchi fondly remembers her time at The Strand. “At a student paper you must become a jack-of-all-trades, learning everything from layout to distributing the newspaper around campus, using a wagon!” Since The Strand, she has written, filmed, edited and produced for outlets that include Netflix, CNN, National Geographic, NBC News, BBC News, Newsweek and Al Jazeera.

Based out of New York City since 2011, Cauchi was shortlisted for 2017 San Francisco Press Club Awards for two stories about issues affecting Canada’s Indigenous populations. In 2020 the James Beard Media Award was bestowed upon her for her work on the Netflix series Rotten, and specifically for the episode about corruption and drug cartel influence on the avocado supply chain. The six-part series was nominated for a 2020 Emmy in the category of Outstanding Business and Economic Documentary. The series, for which Cauchi worked as a key reporter, gave her the chance to work as a detective unearthing the journey of food from seed to table, and the positive and negative impacts along the way. “We uncovered a lot of white collar crime and economic espionage, and we consistently had to follow the money,” she says. “Being a journalist is like being a translator. I have to help people understand each other and I want people to see themselves in a story. Every story is local to somebody.” This was the first Emmy nomination for Cauchi who has served as a news and documentary judge for the past five years.

Currently Cauchi is eagerly awaiting the printing of the book she co-authored with best-selling author and ex-NBC News national security analyst William M. Arkin. Cauchi began reporting and co-writing the book, The Generals Have No Clothes: The Untold Story of our Endless Wars (Simon & Schuster, 2021), in 2019 after she finished Rotten. “The book has been an amazing experience. I got to call top experts in the world to explain things to me until I understood them, even if it took hours! Is there a better job? There’s a real sense of discovery in my line of work.”

In her years as an investigative journalist, there have been many surprises, good and bad, along the way. While researching for her book, Cauchi called the Pentagon to ask about a U.S. military campaign called Operation Spartan Shield. The questions were not unusual and the Pentagon should have had the answers. “When I got a public information officer on the phone,” says Cauchi, “he seemed confused and didn’t answer right away. I heard the clack of fingers typing on a computer keyboard.” Cauchi was asked to repeat the name of the operation. He then asked, “Are you sure it’s an operation, not a mission?” She was sure. In the background, she heard more typing. “It’s not on Wikipedia,” said the spokesperson for the Pentagon. “He told me to put my inquiry in an e-mail. This prompted a chain of correspondence that spanned nearly three weeks, roping in six officials from many departments to respond. The experience flummoxed me: to call the people at the highest office in charge and inform them about something they were doing. That was indeed a surprise. I took it as a lesson on how to approach stories in the future. In essence, it doesn’t matter who someone is or their job title, it’s always important to question how a source knows what they’re telling you.”