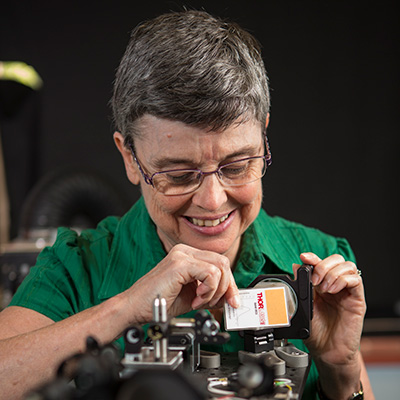 It has been said that eyes are the windows to the soul. The winner of this year’s Distinguished Alumni Award, physicist Melanie Campbell Vic 7T5, is certainly doing her part to harness the power of the eye. By examining people’s eyes, Campbell and her team in the University of Waterloo laboratories seek to identify the presence of diseases such as Alzheimer’s. Among her many scientific accomplishments, she has most recently developed a non-invasive way of imaging protein deposits in the retina of the eye using polarized light. “We study the amount of protein in the eye and this information can be used to help predict the amount of amyloid in a person’s brain in association with Alzheimer’s,” she notes. “I’m also happy to say that I spun off a company with my co-founders at the University of Waterloo. We are going to commercialize the retinal imaging so there could be more early intervention.” Her new approach could be much less expensive and more accessible compared to the brain scans currently used for diagnosis. A goal is to improve the specificity of diagnosis. Most importantly, earlier diagnosis will result in earlier interventions known to slow down the disease.

Another area of focus for Campbell is diabetes, which can have a significant impact on eye health and vision. Her laboratory is working with Toronto’s SickKids Hospital imaging the retinas of teenagers with type-1 diabetes at the onset of the disease. The lab’s goal is to discover whether the initial damage to the eye arises from neural or cellular events. This analysis may lead to improved treatment for type-1 diabetes and protection against eye damage. Campbell helped pioneer a novel, high-resolution technique of viewing single cells in the living retina which has enabled understanding and the development of gene therapies for a number of inherited blinding eye diseases.

Campbell’s journey began at Vic where she earned a BSc in chemical physics. “I have attended quite a few universities but my time at Vic was the best. It came at a difficult time of my life. You see, my father died unexpectedly when I was finishing high school. My mom wasn’t sure what she was going to do in terms of finances. Vic offered me scholarships and I still appreciate that enormously. I worked very hard to maintain a high average so that I would still receive scholarship money every year.” Campbell went on to complete an MSc in physics from the University of Waterloo (1977) and a PhD in applied mathematics and physiology from the Australian National University, John Curtin School for Medical Research and the Research School of Physical Sciences (1982), Canberra, Australia. She also has two post-doctoral degrees.

Campbell found a true sense of community at Vic which helped her deal with her challenges as she grieved the loss of her father and she remains friends with many of her former classmates. “I really appreciated that my experience was very personalized,” she says. “Vic afforded me the opportunity of a broad arts and science exposure in order to figure out my specialty. My interest in EDI also stems from my years at Vic. I would find myself sometimes being the only woman in the lab but I had amazing professors such as Dick Azuma who made me feel equal in the lab.”

Campbell says, “Receiving this award is thrilling. It is so nice to be recognized and to know that someone thinks my work is important. Also, I am so happy to be in the company of the other award winners! I have looked them up and they are all outstanding people. I’m not sure I deserve to be in that company but I’m thrilled to be placed in it!”