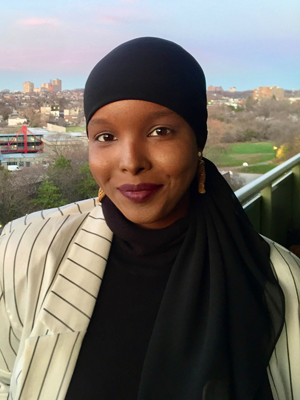 On November 21, Ikran Jama received a life-altering phone call. She had been named a Rhodes Scholar. The Rhodes Scholarships support outstanding students and allow them to pursue post-graduate studies at the University of Oxford. Eleven Canadians were awarded the scholarship in the latest round and only two of them are from Ontario. “It was a beautiful moment,” says Jama. “My whole family cried.” Jama describes her family as being a “team that inspires” her. “I would not have won without the support of my six siblings and my mother, especially my mother—winning the Rhodes is her moment, too,” says Jama.

The Rhodes is arguably one of the most prestigious scholarships in the world. Although she also credits her community, friends and mentors for helping her excel, Jama is an extraordinary student who has worked remarkably hard on her academics and her extracurricular involvement. She is a Dean’s List Scholar with a double major in international relations, and criminology & sociolegal studies, and a minor in African studies. She has won both the Margaret Slater Scholarship and the Elizabeth Anne Sabiston Scholarship at Vic for high academic achievement and entered U of T as a University of Toronto Scholar for high academic achievement and outstanding performance on admission.

Jama has been elected president of U of T’s Arts & Science Student Union (ASSU) twice and as such advocates for the academic rights and policies that affect 26,000 undergraduate students. She oversees a budget of $500,000 and manages a team of three staff, six executive members and over 60 academic course unions. “I found first-year hard—I suffered from imposter syndrome as a Black, Muslim woman. I didn’t feel this way in high school as I was with my community. I chose to get really involved at U of T and help give a voice to other students who were struggling. I am so grateful for my position as president.”

Jama gives back to the student community and also to her Somali community. She has volunteered as a youth mentor for Say Somali and as an assistant settlement worker for the Dejinta Beesha Multi-Service Centre. For the former, she mentored Somali high school and undergraduate students with a focus on breaking stigmas, fostering empowerment and encouraging academic interests. At the latter, she provided translations for refugee claimants. She has also been a senior counsellor for a summer day camp that provides daily camp routines, activities and trips for marginalized children between the ages of seven and 16. As well, Jama has worked to dismantle prejudice as a fellow of Toronto’s Mosaic Institute. She designed and implemented a national social action campaign combatting prejudice that reached over 800 individuals through exhibits and facilitated discussions.

At Oxford, she plans to take the criminology and criminal justice program. “After my master’s degree, I am exploring the idea of becoming a defense attorney. My community is over policed and something needs to be done. I would provide legal services at a reduced rate.” Her long-term goals include going into politics. “I want to create change. I don’t want to fight and beg others to do it for me,” says Jama. “I already have a lot of ideas of how I could make changes as an MP in my community—such as doing away with mandatory minimums in the criminal system.”

Jama plans to take full advantage of her time at Oxford but she will miss Victoria College. “I cannot emphasize enough how much I love Vic,” she says. “There is kindness, compassion and empathy across the Vic community. Staff, profs and instructors are nothing but supportive.” Jama took part in Vic One’s Lester B. Pearson Stream and says the experience will have a life-long effect on her. “I will never forget the close friends I made in Vic One or the profs who taught me. David Wright amazed me with his personal tales of international diplomacy and Anne Urbancic taught me the importance of bringing out the underrepresented voices of history. All told, Vic One inspired me to move forward and commit to international relations.” Without a doubt, no matter what Jama does after Oxford, she will be a bright light bringing attention to voices and communities that aren’t always heard.

Scholars in Residence: A Multi-sensory Approach to Taste