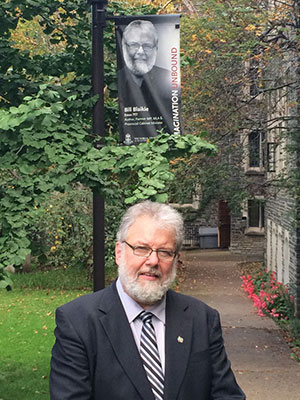 It is with sadness that Emmanuel College learned of the passing of William (Bill) Blaikie Emm 7T7, Hon. 0T9, on September 24, 2022.  Blaikie was a long-time Manitoba politician who served federally and provincially for more than three decades.  He was also an ordained United Church minister.  According to Roger Hutchinson Emm 7T5, professor emeritus and former principal of Emmanuel College, “Bill always insisted that he did not ‘leave the ministry’ to ‘go into politics.’” As Blaikie explained in a 2005 address to the Toronto Conference of The United Church of Canada, he “always felt double booked, committed both to engaging the life and work and self-understanding of the church, and to engagement as a citizen in the political process.”

Hutchinson also noted in his article, Double Booked: A United Church Minister in Politics, that “Blaikie’s commitment to double booking—or double tasking —as a minister and church member and as a politician, was related to his growing appreciation of the prophetic tradition. He looked back with fondness at the role of Winnipeg scholars such as Charles Newcombe, Carl Ridd and John Badertscher in helping him to get beyond the unhelpful assumption that the public realm had become thoroughly secular without religious influence, while religion had been reduced to a purely private matter. In his MDiv studies at Emmanuel College and the Toronto School of Theology, he deepened his acquaintance with the social gospel, the biblical prophetic tradition and Latin American liberation theology. In his contribution to a 2008 anthology on contemporary Christian writing in Canada, called Finding a Prophetic Perspective, he recalled how his Toronto studies with Gregory Baum, Ernie Best and others helped reinforce his growing conviction that churches and political movements could play a transformational role in society. Accommodation to established institutions, on the one hand, and withdrawal from public responsibility or mere protest against the “principalities and powers” on the other, were not the only options.

Blaikie was appointed to the Order of Canada in 2020 for his lifelong dedication and contributions to parliamentary service along with his unwavering commitment to progressive change and social activism.  “His legacy stands for itself—it’s a living legacy,” said Lloyd Axworthy to CBC News.  Axworthy was a long-time Liberal cabinet minister who was first elected as an MP on the same day as Blaikie in 1979. “He was a strong believer in social democracy, he was an advocate of social gospel, but he also was a very good guy to get along with and a good person.”